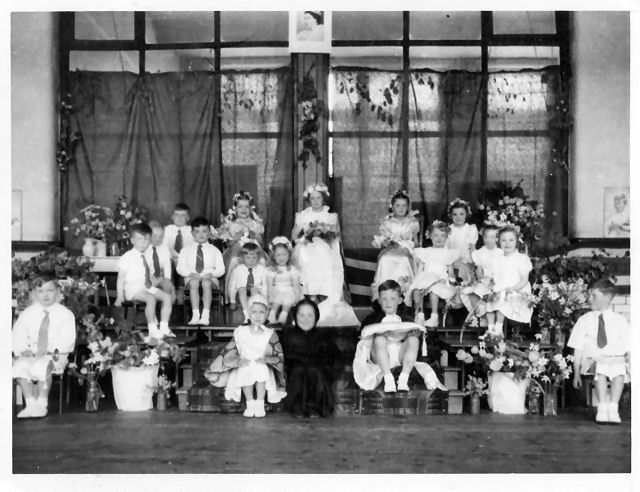 Miss Murdoch told us that May Day is celebrated around the world as a festival of happiness and joy at the coming of summer.  Then she threatened to skin us alive if we put a single foot wrong in front of the parents.

I was relieved to be chosen to share a flowered hoop with Bobbie Pearson and walk in the procession behind the May Queen, then sit smugly on the stage. It was a lot easier than dancing. Rehearsals went on for weeks and the ribbons on the maypole got as frayed as Miss Murdoch’s temper.

On the big day, the school hall was full. The procession was dignified on the whole, although Miss Murdoch spotted Bobbie picking his nose with his free hand and he knew that he’d be in trouble later.

“Let the dancing begin!” squeaked the May Queen and it did. The Barber’s Pole went well and so did the Plait, but the Spider’s Web was too ambitious. Talk about putting a single foot wrong! The Spider tripped over the Fly, the dancers weaving the web piled up behind them and they all ended up in a heap on the floor, pulling the maypole over with them. Poor Miss Murdoch! The parents tried hard not to laugh. They failed.

Inspired by memories of May Day celebrations at Brudenell Infant School in Leeds. RIP, Miss Murdoch!