An Evening with Andy Hamilton

Invited to ‘An Evening with Andy Hamilton’ at the Leeds City Varieties, I didn’t really know what to expect but was happy to go along for two reasons. First of all, I’ve had a great deal of enjoyment over the years from Andy as a performer – his role as Satan in ‘Old Harry’s Game’ is unforgettable – and as a writer of shows such as ‘Drop the Dead Donkey’ and ‘Outnumbered’.

The second reason was that, although a Leeds girl born and bred and familiar with the Grand Theatre, the Civic Theatre – now Leeds City Museum – the Empire and the Theatre Royal, both long gone, I’d never actually been inside the City Varieties before. During my schooldays  the former music hall, which had opened in 1865, had become notorious for shows in which variety acts played second fiddle to striptease.  Advertised in the Evening Post with catchy names such as ‘Strip for Action’, ‘Halt! Who Goes Bare?’ and ‘The Naughtiest Night of Your Life’, they were, or so my mother said, patronised mainly by dirty old men in raincoats. The nearest I ever got to the place was a coffee bar round the back in Swan Street, generally known to its regulars as the Egg and Bacon. It was said – and this may have been why it was so popular with teenage boys – that some of the strippers came across during their breaks, although I don’t remember ever seeing any. 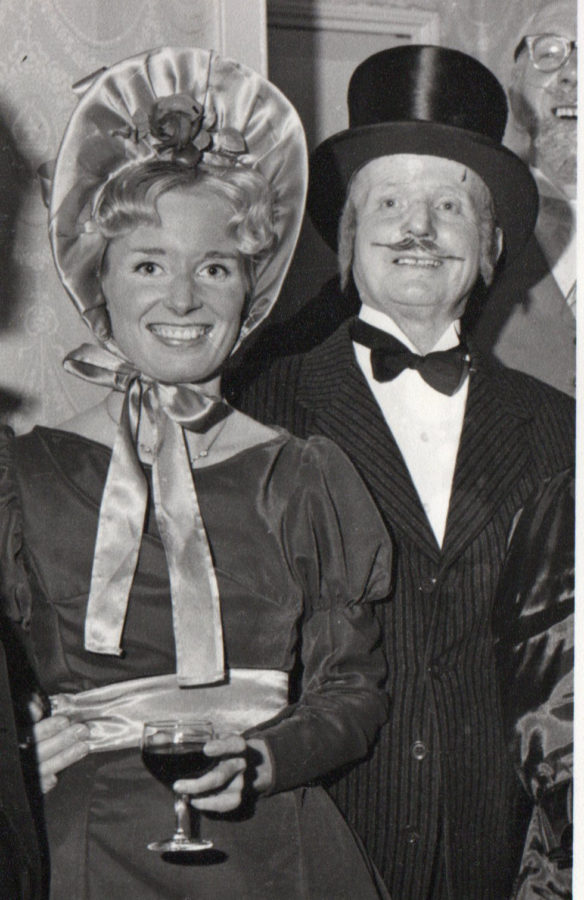 Curiously, the theatre was also the venue for the BBC television series ‘The Good Old Days’, chaired by the flamboyant Leonard Sachs. The audience for that was generally made up of people my parents’ age, dressed up in hired costumes of the period. My father did some work at one time for the gentleman in the photo, a businessman called Clifford Seed, seen here with his daughter Shirley.

There is no trace of a front entrance on the Headrow these days. Instead, everyone has to find their way round to the aforementioned Swan Street, where a new one has been built. Our old coffee bar has become a Bagel Nash, by the way. 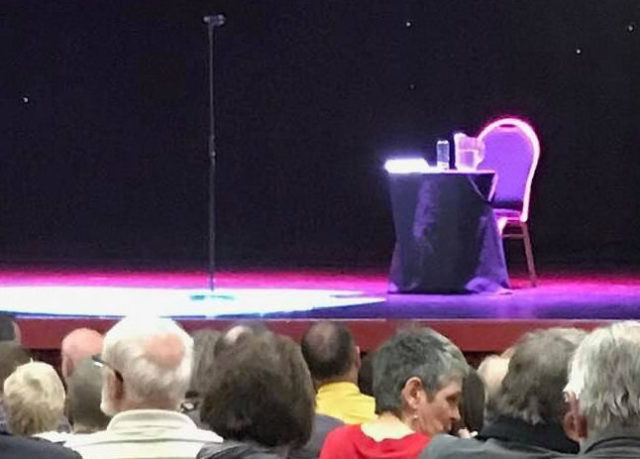 The interior of the City Varieties is splendid, with much red and gold in evidence. Stern notices forbade any filming during the show, though. Not wanting to risk being thrown out, I only took this shot of the set before Andy came on stage. Despite complaining several times about his creaking knees, he never actually sat on the chair.

Andy was probably right to state that the audience was composed mainly of Radio 4 listeners well over 40, but that wasn’t necessarily a bad thing. At least most of us were familiar with the people and programmes to which he referred. He told a fair few jokes, often against himself, and several funny anecdotes but spent more of the time asking and fielding questions about absolutely anything. He even encouraged us to write some more questions down during the interval and leave them on the stage for him to answer during the second part of the show. I did wonder what would happen if no one took him up on it, but plenty did and he answered them all with very good humour. For the record, his own favourite comedians are Billy Connolly and Roy Hudd.

With very little scripted in advance, every show on Andy’s tour will be different, but I feel certain that they’ll be just as enjoyable as the one that I was privileged to attend. Do go along if you can.